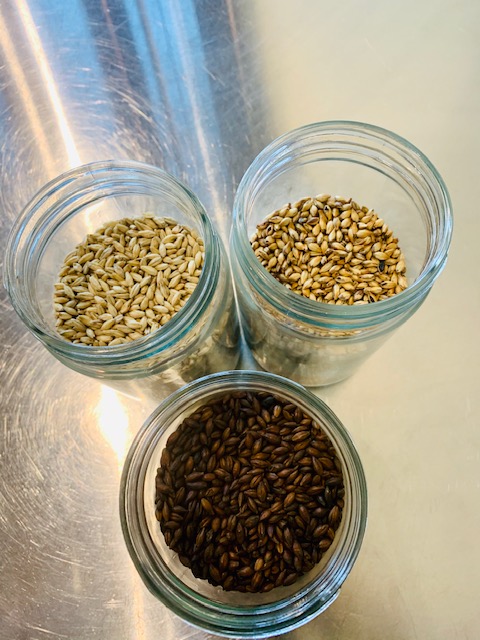 As I start to study in depth for my Certified Cicerone exam, a huge emphasis is placed on studying ingredients of beer and exactly how they affect & play roles in creation of each style. Water and yeast are vital elements of beer, hops are the “sexy” and hyped ingredient, but my favorite ingredient in beer has to be Malt.

What exactly is Malt? Let’s start there. Malt is Barley, which can come in forms such as two row or six row, which is defined by the arrangement of kernels when the head of the plant is viewed down its axis. Brewers tend to feel that 2-row malt produces a fuller, maltier flavor and 6-row malt produces a grainier flavor in the finished beer. That barley then gets sent to a Malting facility that does four things to turn it into malt.

* Steeping- this is for the purpose of increasing moisture levels inside of the grain. Heat and CO2 are produced during this 2-3 day period of immersion cycles between water and air.

* Germination- A continuation of steeping where this grain germinates for a few days longer and controlled. The grain bed is kept at consistent temperatures and and continuously oxygenated. Depending on the type of malt being produced these conditions can be changed by the Maltster to get the desired variety.

*Kilning- This process arrests, or stops germination and starts to dry out the malt. This is where malt can get its different colors and flavor profiles from, based on the amount of time spent and also temperature that’s used in the kiln.

*Roasting- This is where you get those dark, roasted coffee types of malt that you’ll see in porters, stouts, and other dark ales & lagers. There are big roasting drums that malt will sit in up to 800 degrees Fahrenheit depending on the severity of the roast, and the color and bitterness will turn. The malt is then cooled down and analyzed to determine or fix any flavor profiles

So now you have your malt- There are base malts, or in a way, the “salt and pepper” of brewer’s recipes which you’ll find in almost all beers. There are also specialty malts, malts that have taken on other flavors or techniques to give beer added flair. Ever had a Rauchbier, or smoked porter? Those smoke notes come from malt that has been put through a smoker, and thus imparting those smoky notes into your beer and onto your palate. There is also Acidulated Malt or sour malt that can be used to add sour flavors into your beer.

When I divide beers up into categories, I typically dont think along the lines of Ales vs. Lagers. How I think is Malt Forward vs. Hop Forward vs. Yeast Forward beers. These three ingredients drive the beers profile forward while water (a very important ingredient) holds down the fort. My favorite Malt forward beers are those of the lighter variety. Thinking towards a German Helles Lager or a Zwickelbier (which is also just plain fun to say). These beers using lighter toasted malt have notes of graham cracker and sit light, dry, and sweet on my palate. I usually describe these beers as light in alcohol but full in flavor (as they clock in around 4.5%)

Other malt driven beers using darker malt include of course your porters and stouts, but also beers such as the German Doppelbock or a Scotch Ale. These darker, longer roasted malts give off sweetness such as raisin, or plum notes to a beer and these beers tend to be stronger in alcohol. “Bock” means strong in German, so any beer ending in bock will be a higher alcohol version of that beer. Some Scotch Ales may even have malt that has been “Peated”. Much like in a peated whiskey, its using that same time of peat smoked barley to impart those smoky notes and pay homage to the great beverage that is Scotch Whiskey.

Do you feel like you’ve learned something about malt? Do you have favorite Malt driven beers not listed here? I’d love to hear from you!