Home » Beer Geeks Unite! How I Became a Beer Geek (and you can too)

Beer Geeks Unite! How I Became a Beer Geek (and you can too) 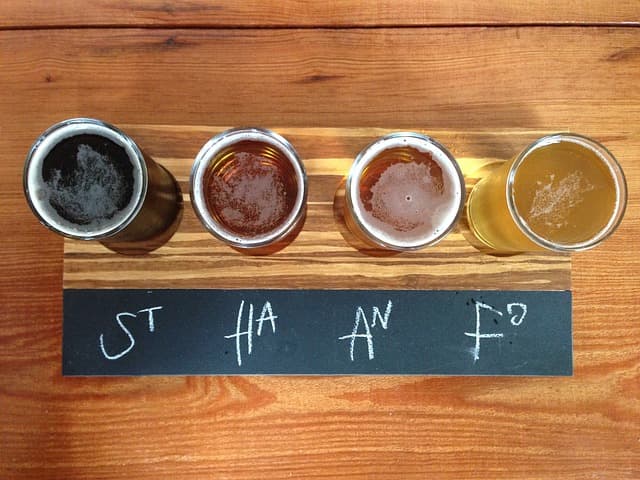 Have you ever had the moment where you stop and realize that you really know your stuff? A moment that may stop and make you think “man, I am really an expert on this” when you’re talking about a subject you’re passionate on?

This moment to me is what I think of as “The Santa Clause” moment. Now, throwing it back for any of you 90s kids, I am talking about the movie “The Santa Clause” starring Tim Allen. At the end of the movie, Tim Allen’s ex-wife looks up and says, “My god, it really is you…you are Santa”. She seems him in the suit, the sleigh, and she finally believes that he is Santa Clause because he looks the part, and truly is the part.

Now my “Santa Clause” moment came about four years ago when I was living on the East Coast and operating a brewery bus tour company where I would bring people to visit three to four craft breweries in a day in New Hampshire, with lunch, tastings, and insider tours all part of the package.

This was maybe my fourth public tour, and I was talking to a guest about hoppy beers and how much they can vary in flavor. I don’t remember the specific conversation outside of that, however, I do remember thinking to myself right after that interaction- “Damn, I really know what I’m talking about!” when it came to craft beer.

After that tour day ended, I recollect feeling very accomplished that I had such a wide knowledge of the beer world, and quite honestly, this made me want to push myself to learn more.

Beer is so expansive. As simple of a beverage as beer may seem, made up of four core ingredients (those being water, hops, malt, and yeast), there is so much nuance and creativity that goes into each beer made, and the background of each ingredient, every style, it’s just wild how much there is to know.

It’s interesting, also because if I were to flash back to my inaugural days of drinking, I didn’t enjoy beer. I grew up in Northern California, the land of Pliny the Elder & Sierra Nevada Pale Ale, and couldn’t stand the bitterness that came with each sip, the piney notes of Pliny, it just wasn’t my thing.

I would drink whatever light American lagers that found their way into my hands, because the price point was justifiable. I tried Blue Moon, which wasn’t “half bad” in my clearly educated 19 year old- I mean 21 year old (of course) opinion.

I was drinking things that were available, at the right price point, and what was easy to buy in bulk- because that’s what you do in college, right?

However, then came the “lightbulb”, or gateway beer, that changed how I thought about beer, served at a spot where beer is revered and presented properly.

This beer was Allagash White, and the place was Toronado Beer Bar in the Lower Haight district of San Francisco.

My first time there I was 22, and upon entering and seeing 50+ beer options, I was a total fish out of water. I knew I liked beers that weren’t hoppy, I asked for one similar to a Hoeegarden, and was served my first Allagash White. This Belgian Witbier opened my eyes to the other broad world of beer styles, it made me thirst for more knowledge about why this beer wasn’t bitter, and why it tasted like spice.

This helped pave the way for me to be the devout beer geek, beer scholar, and beer blogger that I am almost a decade later. I have owned a beer focused tour business, I have gone to school to learn about the business world of craft beer, I have tasted my way through countless flights on multiple nights to experience the unique culture that taprooms and breweries have to offer, and this is what I’ve learned:

Beer is fun, beer is approachable, and beer is complex.

How to Discover Different Beers

One The complexities at first may seem like a lot of scientific processes and terms, but when you can focus on the fun and approachable aspects, and tie them all together, you’re now seeing beer in a much more well-rounded lens. Maybe you have never liked beer, but that’s because you thought like I once did – it’s too bitter or it just tastes like water. I have had those thoughts too, and I now enjoy an IPA almost as much as anyone else.

There are dozens of types of IPAs out there that will knock your preconception about bitter beers out of the water.

Maybe you get intimidated by the waves of new releases that you see in liquor stores or supermarkets and it makes you think that you’ll just avoid the purchase all together because you can’t make up your mind. That’s okay! There are ways to figure out just what the right beer is for you, based on a few simple questions such as flavor profiles you enjoy or the occasion that you’re buying for.

Maybe you’re a guy or a gal who really enjoys craft beer, who makes a hobby out of visiting taprooms and chasing down new releases,  and follows a ton of breweries on social media. But perhaps you don’t know just why a New England IPA is called as such, or what makes a beer taste smoky. I can guide you down the path of beer discovery for most anything you’d like to know, and if it’s something I don’t know- we’ll find out together!

I want to help you become a more informed, well rounded (my waistline hates when I make that joke), and deeper educated beer enthusiast. Maybe you’ll turn full beer geek, like I did, or perhaps you’ll just pick up some fun things along the way such as-

However I can help you explore the world of craft beer through my last decade of diving deep into barrels of beer, smelling fresh hops boiling at a brewery, traveling to beer cities and soaking in local culture. That’s what I aim to do in this set of articles that can bring you from beer novice to beer geek in a few easy steps. My name is Allo Gilinsky, I am your Craft Beer Concierge, so whaddya say?